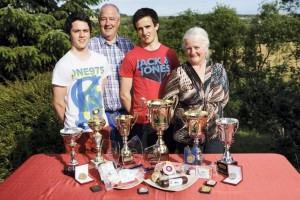 Avril Allshire-Howe from Caherbeg Free Range Pork and Rosscarbery Recipes first won at Blas na hEireann in 2012 and her family business has achieved a place on the winners list every year since then. You can find more details on http://rosscarberyrecipes.blogspot.ie/ or more details on this and our other winners and finalists in our 2015 directory

When & why did you start your business?
The when is easy, 2000, but the why is a story in itself. Willie’s background is business and specifically, printing and stationery, but he always had a grá for the land and we bought our smallholding (<20 acres) because it was small and came with a small house, which was intended for holidays, weekends and retirement! By the way, my family were farming, but I was the person least likely to have anything to do with farming and worked in administration in Cork city (everything from shipping to a funeral home to an oil exploration company & 3 pharmaceutical plants etc). Purchased in 1994, we stayed in Caherbeg for our honeymoon and essentially never again lived in Cork city. Most of the land was leased to a neighbour for the first couple of years, but it was more trouble than it was worth to him, so he didn’t renew in 1997. I suggested that we get 1-2 pigs to keep the weeds down in some of it at least and this was all Willie needed to hear. Within 3 months we had reared 20 free range outdoor pigs from weaner to maturity, and when they were ready, Willie began wholesaling the pork. That was fine, but then I wanted to grow blueberries in the bog and between 1 thing and another, Willie did a Rural Development course with Teagasc locally. At this stage, pigs etc were still very much a hobby, as Willie worked in business fulltime. He arrived home one day in June 2000 and informed me that we would be making free range sausages and dry cure rashers. I thought it was a joke but he was dead serious and in November 2000, he had Caherbeg Free Range Pork Ltd registered; and an on-farm processing unit ready to go. In 2001, we took on another brand, Rosscarbery Recipes, and the difference is that we use locally produced Irish pork for the range. It is not free range. This brand has grown to include international and national award winning black and white pudding; and in October, 2016, the range expanded to Gluten Free Black and White Pudding. Our business development really has been very opportunistic and because of passion rather than hard headed business plans, but it’s our business and we are involved in all aspects.

Who is your food inspiration?
Oh dear, that is such an incredibly difficult question because we’re been inspired by people like Hugh Fearnley-Whittingstall; John & Sally McKenna; the Black and White Pudding Fraternity members in France who will talk about black and white pudding from morning until night; the other artisan producers across Ireland who we respect as they share our values of honesty, integrity and passion for what they do; and of course chefs and consumers who encourage us to maintain our standards.

What do you love about your job?
Another hard question, but the fact that even though it can be incredibly difficult working with family – husband, Willie, sons, William and Maurice – and none of us exactly the shy retiring types, there’s also the satisfaction when we see product on the shelves; used in recipes; recommended by enthusiasts etc, there’s the confidence that I’ve been involved in making everything and I know the process start to finish. More importantly, that Willie and I have two sons who are as interested and passionate about what we do as we are.

What is your typical day?
I really don’t have a typical day. There’s a routine of manufacture, deliveries, instore tastings, office work but no two days is the same. That suits me to the ground as I’ve a low boredom threshold and I love the variety of making products; delivering them and meeting our customers along the way. Time wise, I could start work anywhere between 4.30am and 8am depending on the day and what we’re doing. On my off time, I really enjoy nothing more than sitting surrounded by a few of my cookbooks which inspire me to experiment with our products, although not all get the thumbs up from the rest of the family by any manner or means.

What is your favourite part of the day?
Probably when I’ve been out and about and I come home knowing that I couldn’t have done anything more in the day and I’ve done my very best by our business and our family.

What was your best day since you started this business?
If I can be so bold as to name 3:
a. Getting the post just before Christmas 1998, and finding that John & Sally McKenna had mentioned us in the Bridgestone Good Food Guide. I confess we didn’t even know who John & Sally were at the time, but couldn’t believe that someone thought we were good enough to include us.
b. On reflection, there have been a few best days: watching Willie accept the Gold Medal for Black Pudding in the biggest European Black Pudding competition in March 2007, just 3 months after launching, and knowing he was the very first Irish person to receive any award.
c. Standing at the back of the function room in Benners Hotel in October 2012, watching the awards being presented, and realising that we had won Gold when Artie Clifford had to repeat the announcement. I was on a high.

Where do your ingredients come from?
The Caherbeg Free Range Pork range uses meat from our own herd of free range outdoor pigs (all outdoors, all year round); and Rosscarbery from locally purchased Irish pork.

Tell us about the people you work with?
Willie, husband, M.D. etc is the driving force behind our business; William, eldest son, did his Leaving Cert in June 2014 and has worked with us full-time since. In 2014, he represented the company doing the SuperValu Food Academy course including the presentation, which was no mean achievement for a then 18 year old; currently he is the youngest participant in the part-time Diploma in Speciality Food Production in U.C.C. He and Willie worked together to develop the Gluten Free Pudding recipes. Maurice who is currently studying for his Leaving Cert had the idea for the sleeve packaging for the gluten free pudding. He too plans to get involved in the business in due course. Both lads are very interested in nutrition and health as they are both involved in crossfit and this relates well to what we’re doing in our business focused on producing high quality food. They are taking up the mantle to drive on the business knowing that this is our pension and their potential livelihood although we haven’t forced them to become involved. They’ve always been with us and have helped as far as they were able; now of course they are nearly adults and are well able to take responsibility but also to discuss what direction we should take into the future. There are four in the family and agreement isn’t always a given with everyone having an opinion so discussion can be hot and heavy at times, but that’s part of our dynamic. Lukas is Czech and has worked with us since he arrived in Ireland in 2008 while Rosemary is married to a local farmer and works with us on a part-time basis.

What three words would you use to describe yourself/your business: integrity, quality and passionate.

Has there ever been a situation which started out as a negative but turned out for the best?
The Pork Crisis in December 2009, was a complete disaster as we had just that week cured all our ham for Christmas. It was very frightening as we didn’t know how long before all our records would be checked but it turned out to be an incredible opportunity as for the first time, the public understood why we maintained two brands and that we had no problem identifying the meat source for each. We did lose some of the pork we had purchased from the local factory as it had originated in contaminated herds, but it was a confidence booster in the long-term as we were able to identify all the relevant meat from our records and this was verified by the FSAI representative. Our HACCP system works and we can go 1 step back and 1 step forwards. I have to say though that I really wouldn’t want to see this recur