In mid-March 2015, Blas na hEireann was contacted with a query about the (Irish) provenance of the honey that Irish Bee Sensations had entered. “Our aim is to celebrate fantastic tasting Irish produce, not to investigate producers on behalf of the industry” says Chairman of Blas na hEireann, Artie Clifford, “however we took the complaint seriously and an enquiry commenced”.

As well as entering into an ongoing dialogue with the Federation of Irish Beekeepers Associations (FIBKA) and the Environmental Health Office (EHO), Blas na hEireann also approached all of the relevant government agencies for advice on where to test the honey in laboratory conditions to get more precise information about its provenance.

In April 2015 a second sample of the Irish Bee Sensations product, with a different batch number to that entered into the Awards, was sourced from a retailer. This was a number of months after the Blas na hEireann Awards Presentation in October 2014. Samples from both the batch of honey submitted to the competition, and that obtained from the retailer were sent to the Bremen-based Intertek laboratory for pollen analysis, to determine the botanical and geographical origin of the samples by microscopy and to determine the absolute pollen content by microscopy.

The results of this analysis have now been examined by both Blas na hEireann and FIBKA.

Philip McCabe for FIBKA is confident that “the samples of honey are 100% Irish”.

Academic Director to Blas na hEireann, Prof Joe Kerry of the Department of Food Science UCC, concurs with the results and with FIBKA.  He adds, “The pollen varieties isolated and identified from the honey samples are typical of Southern Ireland. This is consistent with the information provided by Mr Tom Ruttle at the time of entry”.

Artie Clifford states, “Our enquiry has been very thorough. We have examined the issue from many angles. We can confirm that the results of our enquiry indicate that honey producer, Mr Tom Ruttle, met all of the criteria set out in the terms and conditions for entering Blas na hEireann, The Irish Food Awards, in which his product won a coveted Gold Award in 2014.”

BACKGROUND TO BLAS NA HEIREANN ENTRY PROCEDURE AND IRISH BEE SENSATIONS ENTRY
The Terms & Conditions for entering a product into the Blas Awards clearly state the requirements of that product/producer in terms of its (Irish) provenance. https://www.irishfoodawards.com/wp-content/uploads/2015/03/Blas-na-hEireann-2015-Application-Form.pdf

In addition, the Irish Bee Sensations honey carried, as is required of all of the products entered into the Awards, its producer’s EHO/HSE/Dept of Agriculture unique number.  In this case the producer submitted their Environmental Health Office approval number, which was verified by the Awards.

The product was also submitted with the FIBKA approval seal – the Federation’s guarantee of a pure Irish honey product, along with the producer’s FIBKA registration number, which is the registered number of T Ruttle, a beekeeper from Co Limerick, which was also verified.

Blas requires each producer to submit five samples of each product for the judging process.  One of these samples is held as a control, pictured. The FIBKA seal and number are clearly visible. 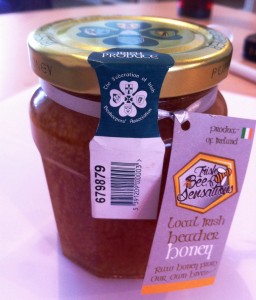 At the entry and judging stage therefore all of the indications were that the product entered was a pure Irish honey product produced by Irish Bee Sensations using Irish honey.

“The Federation label acts as a seal over the cap of the honey jar and has a number on it and also the Federation’s Logo. The labeling scheme is confined to FIBKA members who pack only Irish honey and whose names and addresses appear on the honey jar.”

“Mr. Tom Ruttle was a member of the Kingdom Association in North Kerry although he had not renewed his membership for 2015. He has been a beekeeper of long standing and highly regarded by all who knew him. In 2001 his was Honorary Secretary of the Co. Limerick Association and a well-established beekeeper.”

“From the information available to FIBKA, Tom managed over 50 colonies (hives) in a number of Aparies in South Limerick and North Kerry over a long number of years. He was a very approachable and helpful person and was very forthcoming with his help, especially to new beekeepers. Regarding his honey production, with over 50 hives for the past two years he would have expected to harvest an average of 40 pounds of honey per hive from production colonies.”

This would have provided the producer with approximately 4,000 jars of honey per year in the jar size used by Irish Bee Sensations.