-Results of survey announced at the launch of the 2014 Blas na hEireann, Irish Food Awards – 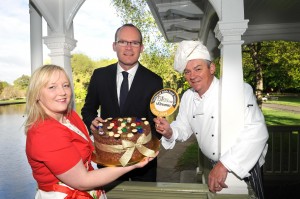 Tuesday 13 May 2014.  A survey of Irish food producers has found that 70% of small to medium sized producers feel that a lack of financial advice and support is the biggest challenge they face in growing their businesses. The survey, conducted on behalf of the Blas na hEireann, Irish Food Awards, also found that for 65% of producers distribution is a major problem; not only nationally but also internationally.

The findings of this survey, titled “Producer Power in 2014’, were announced at the launch of the 7thAnnual  Blas na hEireann 2014 Awards, which took place at The Westbury Hotel, Dublin, on Tuesday 13 May, where Minister Simon Coveney, a former producer himself, made the opening address.

The Blas na hEireann, Irish Food Awards accreditation is the largest competition of its kind in Ireland attracting over 2,000 entries annually. It was set up to reward and support the best of Irish produce and the passionate, talented producers behind it. Award winners get to display the Blas na hEireann symbol on their products which previous, independent research shows leads to an increase in sales.  All entries are blind tasted by a team of over 350 judges in two tranches, including top chefs, journalists, industry experts, inspired home cooks and academics.  The judging system was developed and is overseen each year by Dr Joe Kerry and his team from the School of Food and Nutritional Science at UCC.   The Award winners in over 80 food categories will be presented at an Awards Ceremony in Dingle, Co Kerry on Saturday 4 October, to co-incide with the peninsula’s hugely popular food and wine festival.  In addition Bord Bia sponsors two key awards, The Blas na hEireann Supreme Champion and the Best Artisan producer, which will also be presented on the night.  Last year a chocolatier from Mullingar, Co Westmeath,  Olivia Curran of ‘An Olivia Chocolates’, took the top gong, and has seen business more than double since then.

Government Agencies scored very well in the survey, with producers, small and large, recognising the support that they get from the County Enterprise Boards, Bord Bia, Enterprise Ireland and the Food Safety Authority of Ireland, with Teagasc, BIM and Udaras ranking well within their specific areas.

“Unfortunately the problem seems to be that the impact of Agency support is not being fully leveraged because of difficulties accessing financial advice and support on the one hand and being able gain distribution to new markets on the other” said Chairman of Blas na hEireann, Artie Clifford, a former producer in the seafood sector.

“While these issues are at the forefront of producers’ concerns, they are largely being overlooked.  Blas would be delighted to work with Government agencies to address these issues swiftly in order to support the food producers that have inspired and fuelled this fast growing and vitally important sector of our economy.”

For smaller producers in particular, financial issues are not just about accessing additional funding, they are as much about getting paid on time and been given fairer credit terms by the larger retailers.

“Agencies on both a local and national should be in a position to give financial advice to producers on a one to one basis; everything from how to develop business plans, work out production costs, forecast accurately the amount of financial investment needed for expansion, as well as how to approach and work with financial institutions and retailers in order to guarantee the best on-going results” Clifford continued.  “Financial assistance through the Local Enterprise Offices (LEOs) and increasing the offer of R&D tax credits for the self-employed would also be extremely useful.”

“In addition LEOs could look at the feasibility of setting up localised distribution depots, where smaller shipments could be consolidated” added Clifford.  “In the meantime our Blas na hEireann Producer Forum encourages members to reach out to other producers for help with distribution logistics by sharing resources, which has worked well in the past.”

Other questions in the survey included asking producers to list ‘quality accreditations’ that could benefit their business most.  Winning A Blas na hEireann Award ranked highest of all, almost double that of the next nearest Accreditation.

The Blas na hEireann Awards are now open for entry to producers from all over the island of Ireland.  For further information about on-line entry to this year’s Awards, please click on www.irishfoodawards.com